Kenya is a country with diverse and rich habitat. It has a broad stretch of the forest from the coastal side all the way to the lush grasslands of the Savannah. Ecotourism plays a big role in the economy with tourists flocking the country to see the “Big Five” plus other species of wild animals. This is brought about by the strong national parks and wildlife reserves fully supported by the government of Kenya. Agriculture is also a big service sector in Kenya and livestock in the Savannah is common with most communities in this area being pastoralists.

This has created a lot of wild animal to human conflict with both livestock and wildlife competing for food in the grasslands. This is going on, the poachers take advantage of the situation and are known to hunt and kill wildlife for the lucrative ivory trade without detection.

These conflicts have brought about the need for Wildlife Conservation in Kenya and protection of habitats by various world-renown conservationist and bodies. However, there has been great criticism in how conservation is being undertaken as the local communities feel that they are being locked out and their pastoral land being consumed by these conservancies.

This has led the government through the Kenya Wildlife Serve to come up with Wildlife Conservation projects that are more community based through support by bodies like USAID, African Wildlife Foundation among others. There are various community projects that are being implemented among those who live near wildlife protected areas.

There is also great hope for the pastoralists communities as due to the new devolution model introduced in the country, there is decentralized power to the county. Hence, the counties are expected to take action and help solve the conflicts arising due to competition of land between pastoralists and wildlife conservancy. We have the example of Narok County who have taken full control of the Maasai Mara Conservancy and are using the local people to ensure that wildlife is protected and they still can graze their livestock harmoniously among the wild animals.

This is one of the main drivers of conservancies in the Northern Kenya region, parts of the Rift Valley and the Coast. This is a community-led, non-governmental organization whose mission is to develop resilient community conservancies, which transform people’s lives, secure peace and conserve natural resources.

Northern Kenya was a place full of ethnic rivalry, poaching, conflict and competition for water and grassland. Through the conservancies, people now live in peace with an improvement in security through training of community-based rangers approved by the government.

The security handle cases on cattle rustling as well as poaching in the area. There has been a rapid decrease in poaching as well as an improvement in grazing grasslands due to the various environmental conservation training offered to the communities.

The NRT headquarters is in Lewa Wildlife Conservancy.
Lewa Conservancy is a wildlife and habitat conservation centre through the protection and management of species, the initiation and support of community conservation and development programmes and the education of neighbouring areas in the value of wildlife.

Some of the wildlife reintegration success story done by conservancy include;

Lewa Conservancy is open to the public and offers breathtaking safaris through the conservation and also offers accommodation in their Lewa Wilderness facility.

You can find out about the other 35 conservancies here; www.nrt-kenya.org

The Ol Pejeta conservancy is a non-profit conservancy located in Central Kenya’s Laikipia county. The conservancy works to conserve wildlife, generate income through wildlife tourism and complementary enterprises for re-investment in conservation and community development.

This is known as the largest black rhino sanctuary in East Africa having fostered over 100 rhinos. It also houses the remaining Northern White Rhinos in the world who were moved from Dvur Kralove Zoo in the Czech Republic. The Sweetwaters Chimpanzee Sanctuary is situated here, providing a haven for orphaned, abandoned and rescued chimpanzees. It is the only place in Kenya where these great apes can be seen.

The Big Five are also found in this sanctuary making it a safari destination as well as other African animals. It also operates a successful livestock program benefiting the pastoralists. Ol Pejeta provides funding to surrounding communities to aid health, education, water and infrastructure projects.

This is one of the world’s most successful orphan elephant rescue and rehabilitation program and a pioneer conservation organization for wildlife and habitat protection in East Africa. The trust mission is to help save lives of orphaned elephants and rhinos who are ultimately released back to the wild. The trust has successfully hand-raised over 150 infant elephants and effectively reintegrating them back to wild herds in The Tsavo and claiming healthy wild-born calves from former-orphaned elephants raised under the Trust care.

Young elephants are rescued from different parks in Kenya after either their mothers are killed by poachers in search of ivory or are abandoned by their herds when running away from poachers.

They have two integration centres;

The Nairobi sanctuary is open to the public every day for one hour between 1100hrs & 1200hrs at a small entrance fee. There is also the option of fostering a young one at $50 or more per year. As a foster, you can arrange for a private visit and spend more time with the young elephants in the evening.

The Giraffe Centre located in the southern end of Nairobi was established in order to protect the endangered Rothschild giraffe found in the grasslands of East Africa. The nature sanctuary is a wildlife 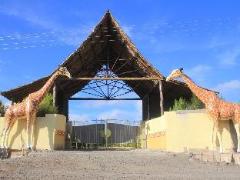 conservation education centre for urban school children who flock the place every week.

It is also open to the public making it a tourist destination in Nairobi, the main attraction to children and visitors at large is feeding the giraffes at a raised observation platform. The place is also home to several warthogs who roam the area freely together with the giraffes.

Wildlife conservation has been a major concern for all as there has been a very high decline in the number of different species due to habitat loss and human conflict. We have also seen a great decline in elephant and rhino population to almost extinction due to poaching in search of ivory for trade, especially in the Asian continent.

The greatest step taken to stop extinct of elephant and rhino is the ban in the ivory trade in China which was the biggest market ever. This was brought about by wildlife activist joined together with world-famous people in supporting the WorldAid mantra of “When the buying stops the killing can too”.

You can join in the conservation of wildlife by supporting any of the organizations mentioned here or others out there through donations or visiting the conservancy themselves are all funds raised go towards improving our environment and all species that inhabit the land.