Wild Animals Kenya – The Herbivores of the Savannah

Some animals in the Animal Kingdom have to sacrifice their lives (not willingly) for others to succeed. They are referred to as prey and they are hunted down by their fellow animals’ as a meal. Well, no one would want their life cut short but that is how the food chain works.

One of the main success of African wildlife is the availability of enough prey for roaming predators. The prey success is also drawn by the vast grasslands and forests that provide enough grazing and foraging area. Most predators are known to be carnivorous and love preying on the herbivores who graze lazily along with the Savannah grasslands.

In the Kenyan wild, these are among the animals’ you will not miss seeing grazing even out of the protected areas. Though they face a lot of habitat loss due to farmers fencing off most areas to avoid competition for pasture with the livestock. Due to their high bleeding cycle, there are able to keep their species growing. Below are some herbivores you will not miss while on a safari game drive in Kenya.

Zebras are characterized by distinctive black and white striped coat. The stripes come in different patterns, unique to each individual. There are two types found in Kenya, namely; the plains zebra and the Grevy zebra. They are social animals and live in small harems to large herds and at times accompany other animals’ like the wildebeest.

The plains zebra is very common and can be seen grazing in the plains, grasslands and scrublands in different parts of Kenya. The Grevy zebra is classified as an endangered species and is found in the Northern Part of Kenya forming the Special Five of Kenya. 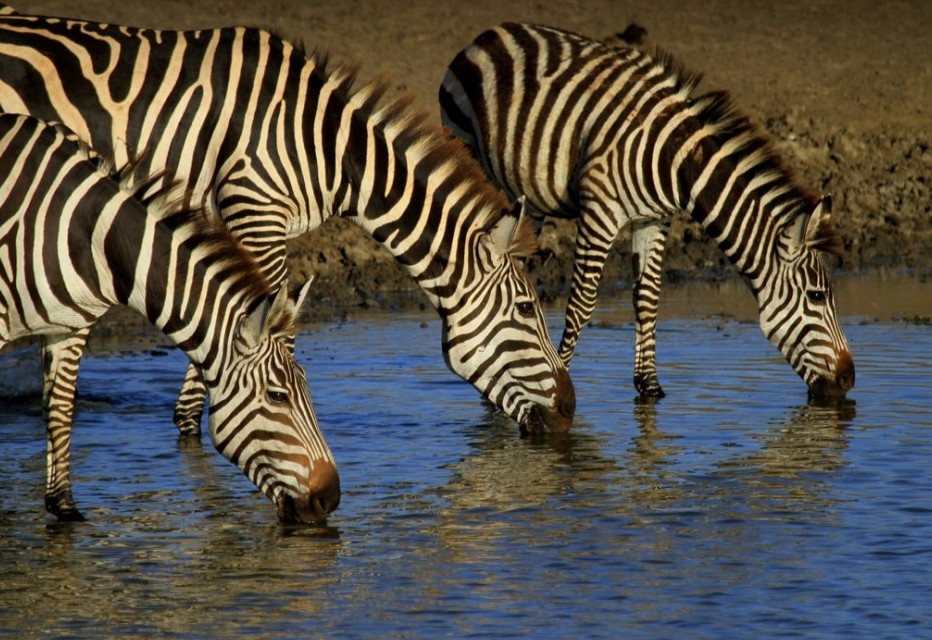 The blue wildebeest species are found in Kenya and are a great tourist attraction due to their annual migration in search of pasture. Their bleeding period is normally after the long rains and it usually takes a short time and the newborn calf is up on its feet and can outrun a predator. The birthing season is a great attraction in the Serengeti plains in the months of March-April.

Wildebeest graze in mixed herds with zebras which heightens their awareness of potential predators. The greatest predators include the spotted hyenas who target the young calves and other large carnivores. 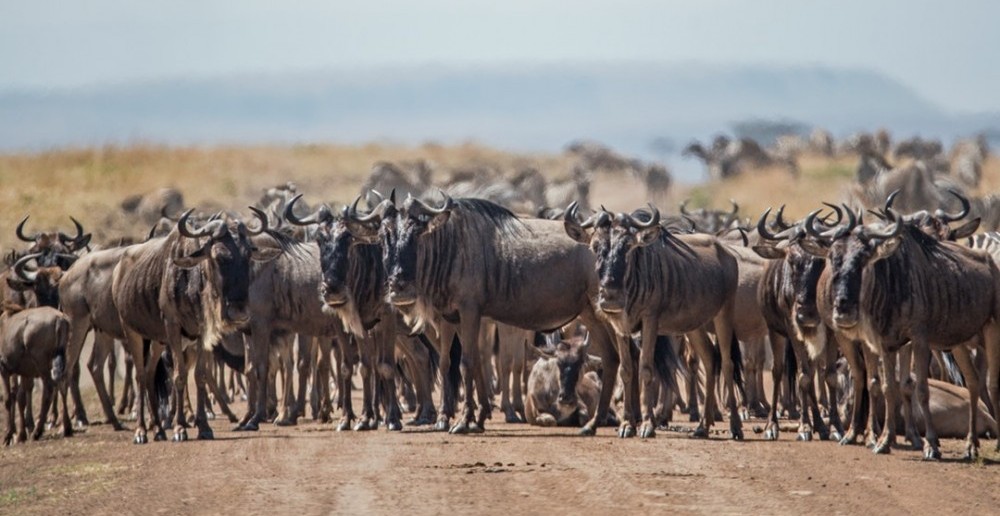 The impala is one of the most common wild animals you will meet in any national park in Kenya. The herds are normally in three distinct social groups; the territorial males, the bachelor herds and the female herds. They are popular for two characteristics leaps that constitute an anti-predator strategy. 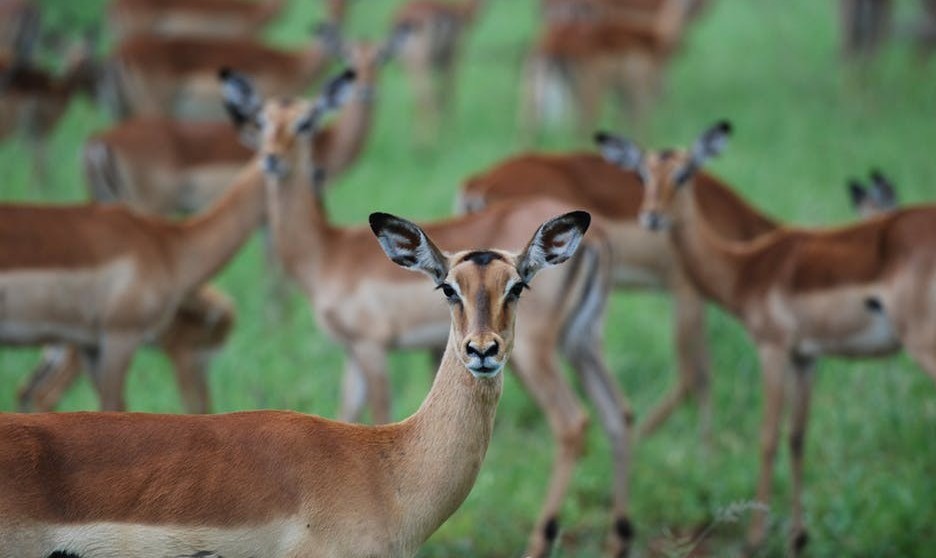 The common eland is the second largest antelope in the world and found in East Africa. They form herds of up 500 but are not territorial. They prefer areas with a wide variety of flowering plants such as open grasslands and woodlands and avoid dense forests. 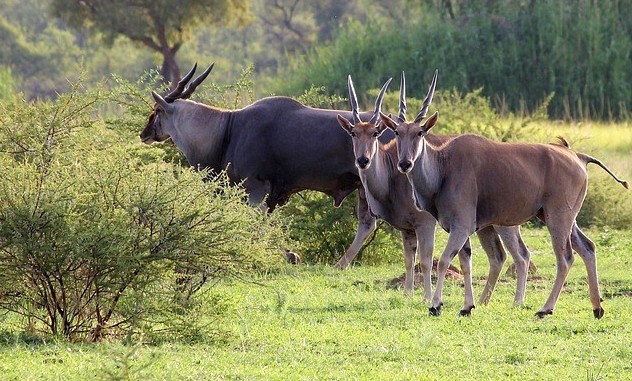 This is a forest antelope that inhabits dry, flat and heavily forested regions. They are browsers and feed on foliage from bushes, trees and herds. The lesser kudu is mainly active at night and during dawn and seeks shelter in dense thickets just after sunrise. They exhibit no territorial behaviour and fights are rare, only the males have spiral horns. 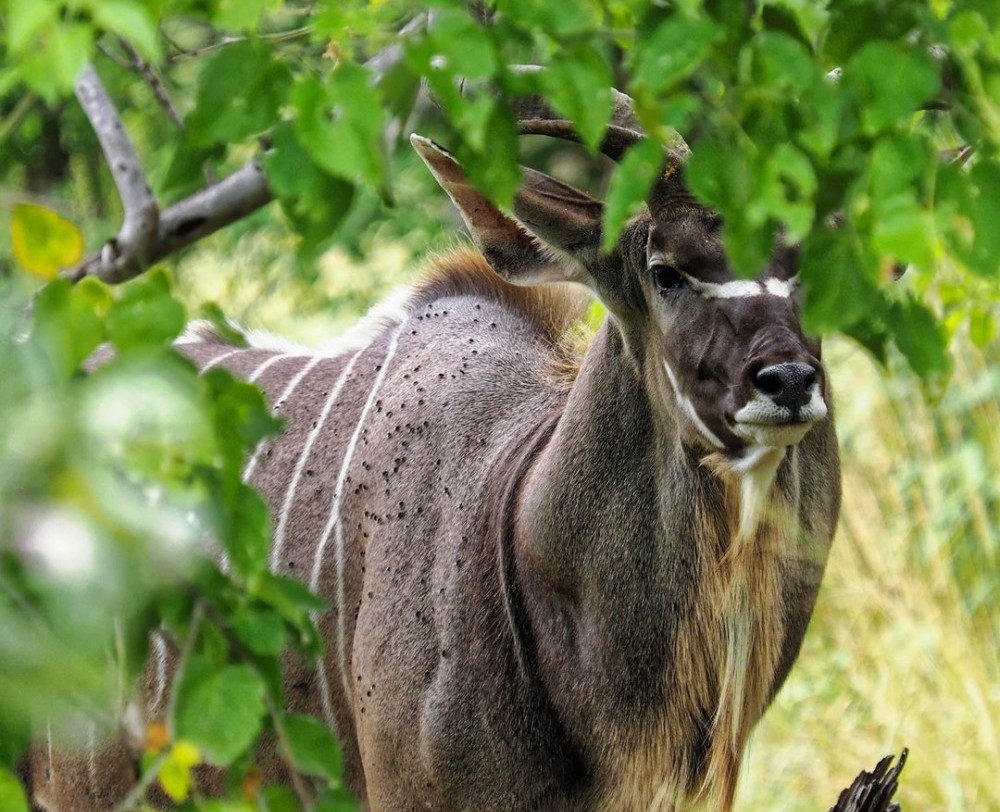 The oryx prefer near-desert areas and are native to the arid areas of Africa. In Kenya, they are found in the Northern region and form ‘The Special Fives of Samburu‘. They live in herds of up to 500 and can survive without water for long periods. Both male and female have horns and use it as a lethal weapon to fight back their predators. The horns also make them a prized game trophy which has led them to near extinction.

The most common species of gazelles found in Kenya is Thomson’s gazelle. They are small antelopes and are coloured brown and white with a distinguishing black stripe. Gazelles are swift animals’ and are known to run at a burst as high as 100 km/h (60mph) or run at a sustained speed of 50 km/h (30mph).

Gerenuk also is known as a giraffe gazelle is a long-necked antelope that is found in the drier parts of East Africa in the Northern end of Kenya. It is characterized by a long, slender neck and limbs, wedged like head and large, round eyes.

Foraging and feeding are their major activities. It is known to reach higher branches and twigs than other gazelles and antelopes by standing erect on its two hind legs and elongating its long neck. 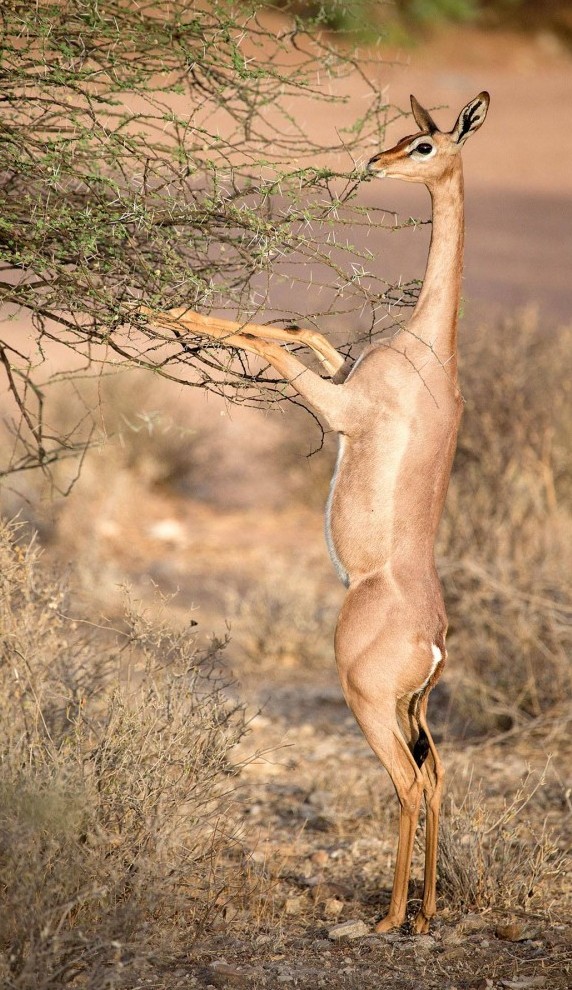 This is a small dwarf-like antelope. The name dik-dik comes from the alarms calls made by the females to alert the animals’ of predators. They live in habitats that have a plentiful supply of edible plants such as shrubs. 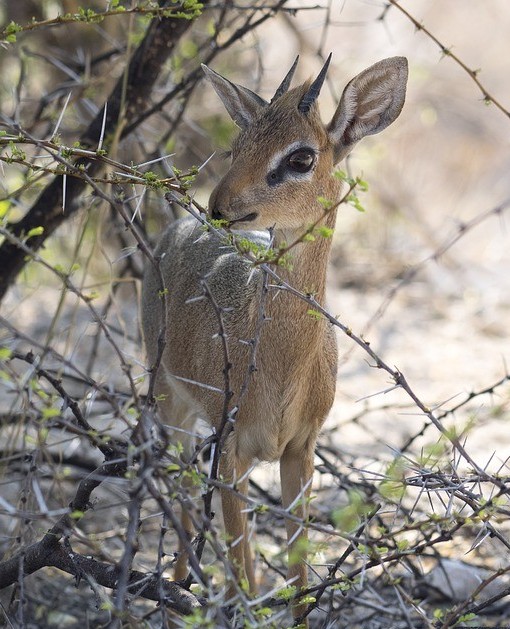 Hirola antelope is a critically endangered species found in the borders of Kenya and Somalia. They are medium-sized antelopes, tanto rufous-tawny in colour with slightly lighter underparts, white inner ears and a whitetail. They are adapted to arid environments dwelling well in the bush to wooded Savannah with low shrubs and scattered trees, most often on sandy soils. 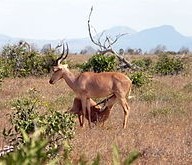 This is a swamp-dwelling antelope that is confined in swamps and marshy habitats. They are characterized by a shaggy, water-resistant coat that varies in colour. Their body and feet are specially adapted to their swampy habitat. Sitatunga is selective in what they eat and feeds mainly on new foliage, fresh grasses, aquatic plants, sedge and browse. 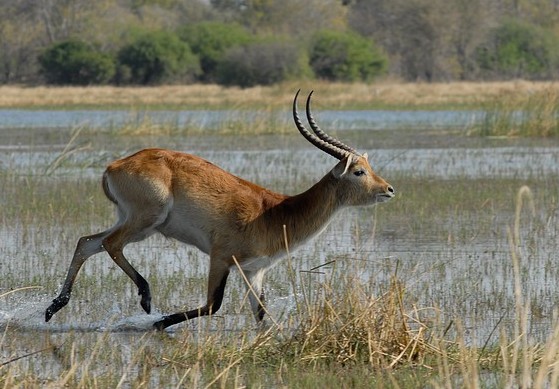 Waterbuck are large antelopes that inhabit areas close to water sources as they cannot tolerate dehydration. They are predominantly grazers and thrive in grasslands. 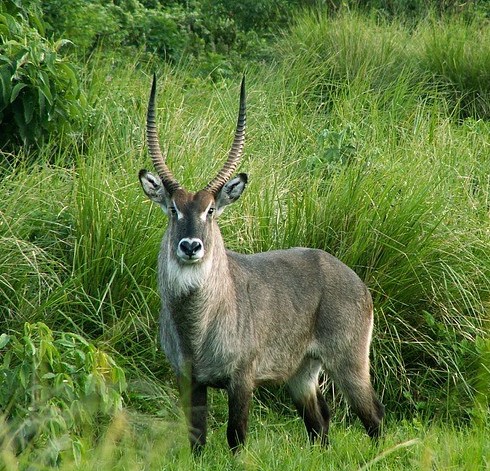 This is a small antelope with a reddish-brown coat with white markings. This species of antelope are found in Sub-Sahara Africa and thrives well in rain forests, montage forest, bush-Savannah forest and woodlands.

This is a reddish-brown antelope that thrives on wet grasslands. They are primarily grazers that prefer to feed on grass.

This is a large antelope with an elongated forehead, oddly shaped horns, short neck, pointed ears with legs that have black markings and are unusually long. The hartebeest is very alert but non-aggressive. They are grazers and mainly feed on grass. 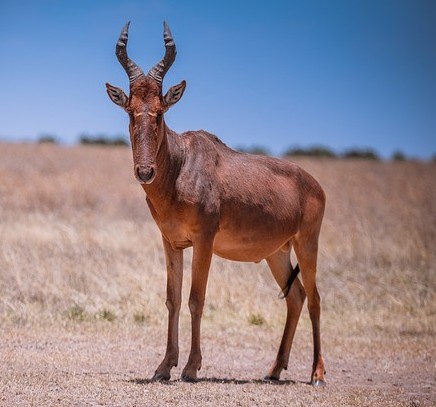 The bongo is among the largest African forest antelope species. They are characterized by a striking reddish-brown coat, black and white markings, white-yellow stripes and long slightly spiralled horns. Both sexes have horns and have complex social interaction. 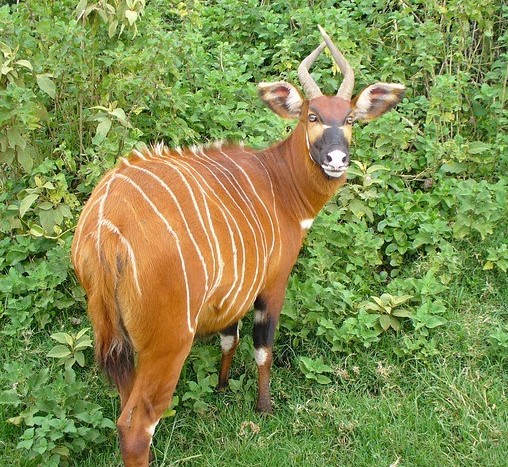 This is a large antelope found in the woodlands and grasslands Savannah. In Kenya, the roan antelope can only be sited at the Ruma National Park, the only protected sanctuary that is home to this endangered species. The roan antelope is highly affected by habitat loss due to human settlements and poaching. 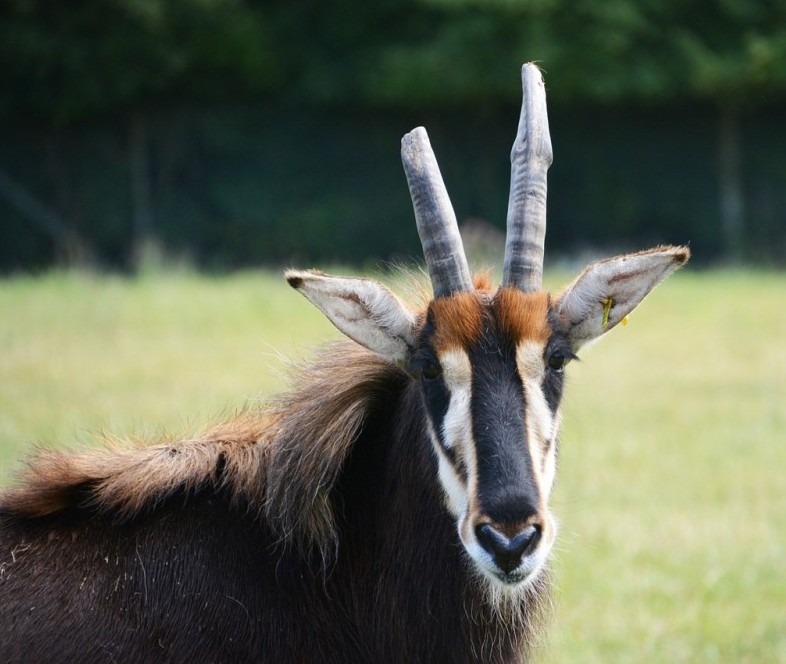 The giant forest hog is native to wooded habitats of Africa and is considered the largest wild member of the pig family. It is mostly black with extensive hair on its body through the hair tends to become less pronounced as the animal ages. They are herbivores as wells as scavengers.

This is a member of the pig family that lives in forests, woodland, riverine vegetation and reed beds. The bushpig is nocturnal and resembles the domestic pig. They are identified by their blunt, muscular snouts, small eyes, pointed, tufted ears and buckled toes.

They are social animals’ found in sounders of up to 12 members. They are omnivorous and their diet includes; roots, crops and carrion.

The warthog is a wild member of the pig family found in the grasslands, savanna and woodlands in Sub-Saharan Africa. They are not territorial but instead, occupy a home range. They are a common feature in the Kenya Wildlife Headquarters and its environs where they are seen grazing in the well-manicured lawn. At times they walk along the busy Langata road with no fear of the human population around them. 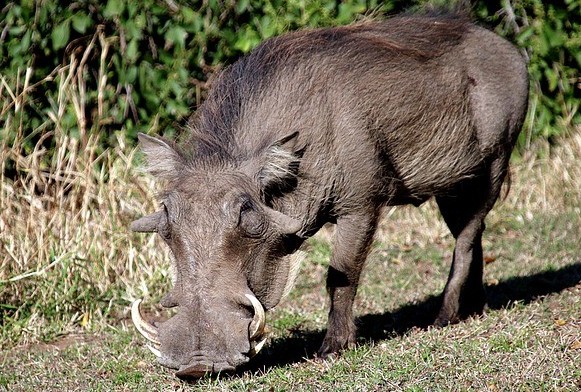 Baboons have long, dog-like muzzles, heavy powerful jaws with canine teeth, close-set eyes, thick fur except on their muzzles, short tails and rough spots on their protruding buttocks. Their buttocks are nerveless, hairless pads of skin that provide comfort when sitting.

They are ground-dwelling and are found in the open Savannah, woodlands and hills. They are omnivorous and feed on insects and occasionally prey on fish, hares, birds, vervet monkeys and small antelopes. They are also known to raid human dwellings and prey on sheep and goats. 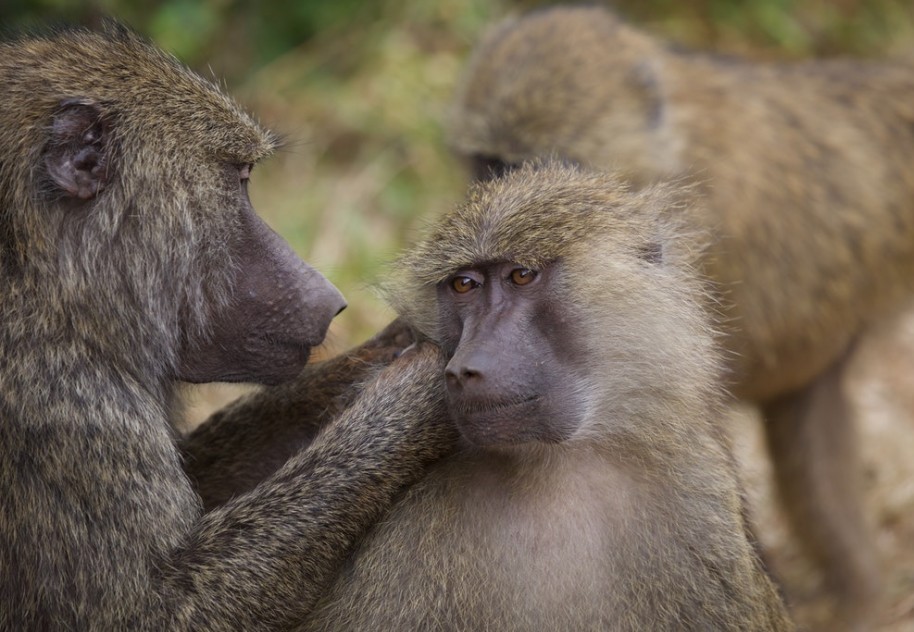 In Kenya, there are a number of monkey species found in different forests and parks. Monkey is one of the few animals’ species that can be seen roaming freely out of the protected area. In some places, they have been known to be a menace (agricultural pests) causing extensive damage to commercial and subsistence crops. 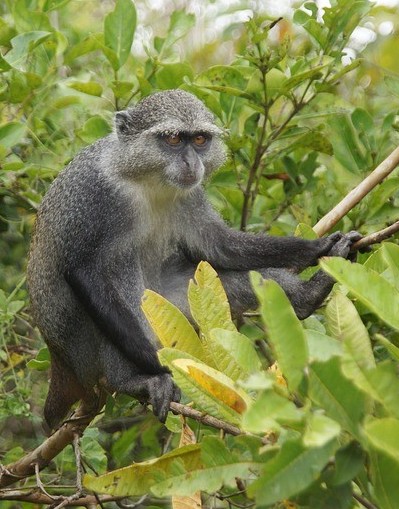 Below are some species found in Kenya:

Colobus Monkey: In Kenya, they inhabit coastal forests, riverine forests and woodlands. They are the one species of monkeys that don’t have thumbs.

Sykes Monkey: They are characterized by a large white patch on the throat and upper chest and a grizzled (not blackish) cap.

Blue Monkey: They are not noticeably blue as per their name but have little hair on their face that give a blue appearance. They are found in the evergreen forest as they are highly dependent on humid, shady areas with plenty of water.

Vervet Monkey: They are characterized by a black face and Grey body fair. They are known to inhabit mountain areas and avoid rain forests and deserts.

Debrazza Monkey: This is one of the most widespread primates that live in forests. They are characterized by Grey fur with a reddish-brown back, black limbs and tails and a white rump. A white stripe runs down its thigh and an orange crescent-shaped marking appears on its forehead. 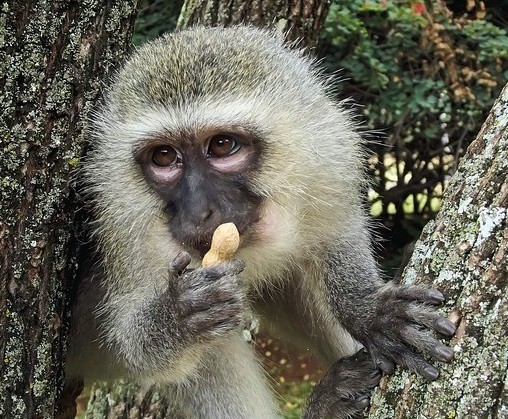 Though chimpanzees are not native to Kenya, there is a sanctuary at the Ol Pejeta Conservancy known as The Sweetwaters Chimpanzees Sanctuary that takes cares of chimpanzees rescued around the world where they were caged and kept as pets. They are rehabilitated and taught how to live in the world again, free from human interaction.